Hi, it’s Jeff of 4Spot Marketing. We’re going to go over the 50. Internal – Split Name campaign. Very straightforward campaign, does exactly what it says. You may be collecting on your initial, like, data capture field on your website. Maybe you’re not collecting first name and last name. Maybe you’re having one field filled out that is simply their full name. So it says in this case, Jeff Arnold. So, what you’re going to do is you want to split that out. So, what we’re going to do is we’re going to start this campaign. Go to the Start button. It’s going to run the HTTP post which will send all the data over to PlusThis. Inside of PlusThis, it will parse the first name and the last name, and it will put them into individual fields for you. We’re simply going to stop this campaign right afterwards, because everything that needs to happen, happens inside of the PlusThis system. 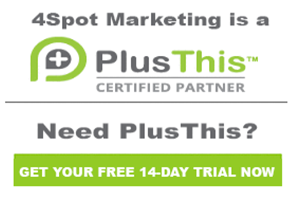 See How We Can Help